M-30 works: The stage is unique, unexplainable and majetic. It deserves an in-depth recognition. The pharaonic idea of chaging a city almost completely constitutes a good portrait of the current urban policies. The progress of the works, more and more catastrofic, expensive and pharaonic, as open wounds in the land, deserve to be documented before they are forgotten. However, is not only about critizing the proper works as well as focusing on the reform of M-30. When the project to be carried out has sense the works are unavoidable and a lesser evil, but the project in which we are on is probably the most representative example of a stake in the use of private vehicles in Madrid.

Due to these reasons, the only method we found to approach the nonsense of the most popular ring road of the city, like characters of aFellini movie in an apocalyptic movie set, areaciega andBasurama organized a visit in a turistic cabriolet bus around the M-30 works. We got on it with many other people that wanted to check out the great black hole of the mayor Gallardón, looking for that treasure, candy of the big construction companies of the country. From a height of 4 meters, looking over the fence, the works showed as its maximus splendor.

The objective was not other than to make people think with a performatic and carnival-like attitude regarding a surrealist project (it´s not obvious that the reasons behind the project are purely urbanistic or in the interest of the citizens). And of course, to get ahead of the FUTURE and to be the first tourist that visit which in a few years will be the most visited touristic attraction of Europe. Among such peculiar tourists were famous scholars, local activist, environmental engineers, architects aware of the project of the park (the green mat) that will cover the tunnels, a representative from the political party Izquierda Unida that accompained the MEPs when they came to evaluate the project, as well as many other people from multiple fields, plus two musicians that entertained playing live jazz.

The tour started at the entrance of the south by-passin Méndez Álvaro street, and finished in Plaza Castilla, including the towers over Ciudad Deportiva of Real Madrid as an exclusive view courtesy of our travel agency. The tour highlighted the most hardest hit area, between Puente de Praga and Puente de Segovia, authentic battlegrounds. Along the tour were mentioned the construction companies that won the public bids to carry out the works, as well as the theoretical cost of their contracts. When the bus got closer, the workers happily gret the tourists, which celebrated overjoyed the  reception offered by the inhabitants of the works, which were denominated by José Luis Córdoba as an “system with a life of its own”. Like in every great tour, the hostess signalled to the tourists the best places to take pictures as souvenirs and there was a stop to buy typical products.

The touristic trip to the M30 works in Madrid took place on September, 17th of 2006 in a cabriolet double-decker bus M-30 and organized byareaciega and Basurama. Production by SauroPixels.

Many years later, we wrote a text about M-30 that can be read in the text section.

The following links give additional information about M-30 thatBasuramaAreaciega have used:

Chainwork Reverted is an audiovisual project on consumption, waste and recycling. The shopping cart is chosen as symbol of consumption that relates buyers and recyclers, the transport of newly-purchased products and materials salvaged from trash.

The consumer is a key part in this mechanism, which extends the production chain to the landfill. Consumption and waste are part of the same process. In the video-installation Chainwork (trabajo en cadena) we presented this topic displaying side by side supermarket products and trash at the waste separation plant.

Chainwork Reverted researches the consumption/waste relationship by including its main actors and showing how the recyclers reverse the process to a certain extent. The video-installation shows how consumers transport their purchases in their shopping carts and how waste pickers carry the materials rescued from waste.

Although recycling is just another mechanism of industry and society to produce and consume more with a clean conscience, waste pickers play a key role in recovering value from waste. They perform a task nobody else wants to do. Even so, as they work with what society throws away, in other words, waste, they are often mistreated and undervalued. This project aims to highlight the work performed by these informal workers, so rarely recognized. 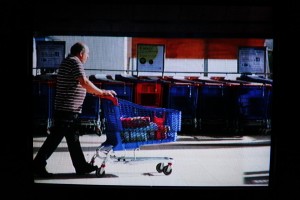 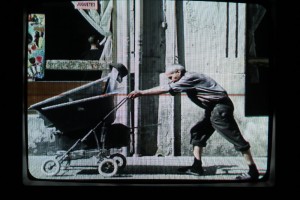 The project was developed thanks to a production grant by  Fundación Bilbao Arte during 2015.

The web with images of the process of production can be accesed at basurama.org/chainwork/.

Talk about the process:

You can watch the the talk about Chainwork Reverted (it starts in minute 1:01:00): 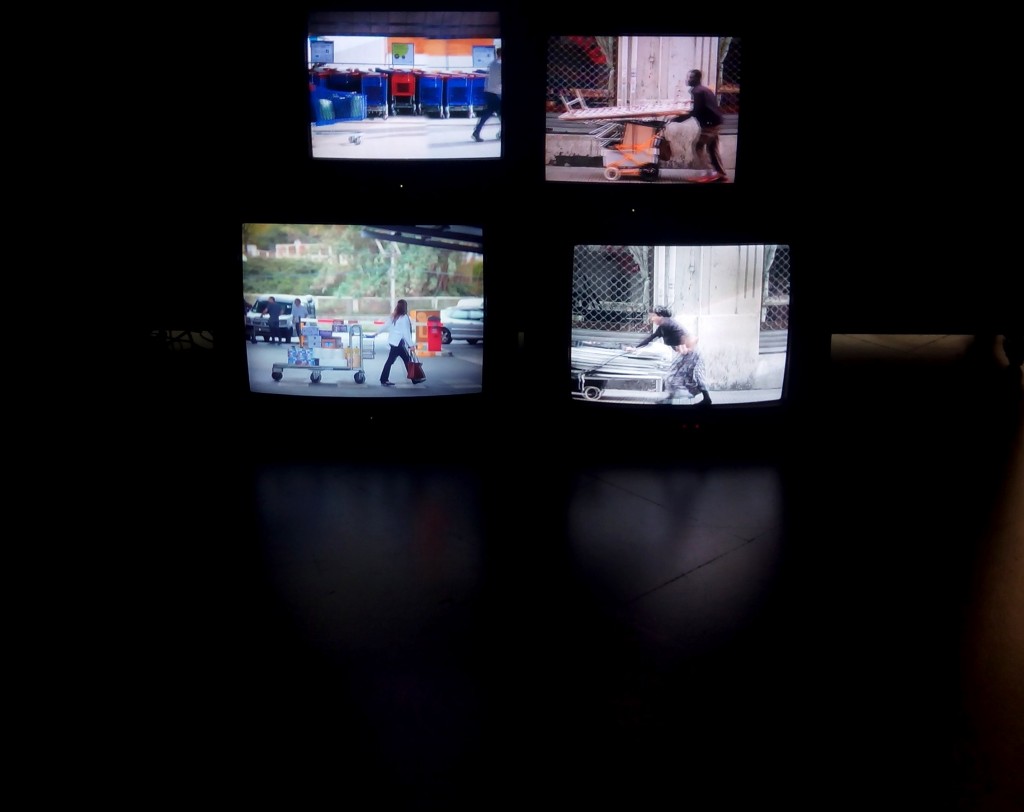 Made during our stay at the Baladre artists residence, part of Lo Pati Art Center. Located in Balada, in the Ebro Delta, Tarragona . 22-28 July 2013.

On the occasion of the exhibition about landscape “Relat de belles coses falses” (Story of beautiful untrue things), we were invited to make a one-week residency at The Pati.

Thinking about how to dialogue with such a specific context,  so calm, controlled and topically “beautiful” as the Ebro Delta is, and how our leisure is the fundamental reason for the coastland consumption in many countries, we decided it was soon enough to ask the landscape and territory what it their opinion about it.

We dedicated our time to develop, along with Eva García Pérez, a series of actions in the landscape, and to devote all our emotions and five senses to collect their responses. Those were sometimes visual -fundamental sense to the traditional representation of landscape-, and sometimes with touch, hearing, taste or smell. Let the landscape itself tell us what does it think of low consumption! We always thought, and even talked in its behalf, that it will like it much better than the hyper consumerism needed to have a good entertainment today!

A vision by Basurama and Lucía Egaña on the phenomenon “RoskildeFestival2013”, a 9 day long music festival with an attendance over 125.000 people.

Basurama participated with the installation “The Whirlpool of waste”, that invited everyone around to throw their garbage into the whirlpool. It was an ideal opportunity to document this large consumer phenomenon associated with mass culture.

All videos made by Basurama, Lucía Egaña and Jacobo García Fouz (1/7).
All content (except where stated) under Creative Commons Attribution-NonCommercial-ShareAlike 3.0 Unported License.
Fair use of the quotes by classic authors and personalities.

The videoinstalation has been in:

First prize in the CIWEM‘s EPOTY competition in the ‘Environmental Video of the Year’ category.