Using automobile waste and scrap cars as raw material, Basurama conducted an itinerant installation, called Miami Trash Machine (MTM). The MTM is at the same time an extrage object and an interactive sound system. Public was the protagonist in a ludic public event, were everyone was invited to participate. A set of lights, sound sources and sensors that temporarily colonized different parts of the city generating activity parameters and unregulated communication, while the question raised was: Is it possible to inhabit public space in Miami?

Research project that explores and reinterpret the idea of residual spaces in El Cairo. The Project focused on researching current conditions in urban space, waste management processes, recovery and reuse of public space phenomena and the creation of a local network in order to come aout with an intervention project that will take place in 2012.

Project to improve the conditions of public space in the Refugee Campo of Suf in Jerash. During a week we worked involving the local community of Palestinian refugees to build a childrens playground and a shading area at the Woman´s Centre.

During the 20th century the urban model has been characterized by a progressive, when not massive, presence of cars in our cities. This generated extensive cities which final objective is to provide the maximum mobility for vehicles, leaving the pedestrians to a second place, even in the city centre. Lima is not an exception. An urban approach based on an indiscriminate and informal growth, with a lack public transport facilities. Public transport is therefore replaced by a massive informal transport (more than 500 lines), where pedestrians are a secondary element and public spaces became abandoned landscapes doomed to degradation.

The project Urban Solid Waste (USW) Lima focus on the recuperation of one of the most original and unusual places of the city, the electric elevated train, in its way through the Surquillo district.

This structure is probably one of the most surprising urban wastes you could find in the city; not only because of its shape and dimensions (9 meters wide concrete platform and several kilometres long) but because of its iconographic nature and symbolic characteristics in limeñan culture.

There has always been a big controversy around this infrastructure. The construction started in the eighties, during the first term of office of Alan García, as a solution for Lima’s public transport problems. Nonetheless “el Metropolitano” has only been a promise and has never been finished.

Beside the urgent need to think carefully about the public transport in Lima, this infrastructure demands an alternative use. For Basurma it is a potential public space, an elevated public park, a place to walk beyond the surface.

Reusing the abandoned electric railroad track Basurama invited the community members an local artist to participate in the creation of a new place, a public space for them. Almost all the amusement park was built up of recycled material such as tires and other car parts.

The project aims was to find new utilities for deserted places in the city of Asunción. The main objective was the enrichment of these places trough the reutilization of waste. Trash was modified and converted in an urban playground. Thanks to this intervention the neglected public spaces turned into a place for leisure activities, where people could enjoy. Hence there is no need for a high amount of investment to recover spaces that belong to citizens.

In Buenos Aires we found an essential phenomenon that helps us to understand the trash´s reality, and also a key to comprehend some of the social conflicts of Latin-American society. This fact is about sorting waste out on an informal way, mainly cardboard. This issue has been tackled from multiple approaches. In this project we worked with the cardboard collectors not as an “object” but as an action platform.

MercoRus, is a tour around southamerica which aim is an open reflection on southern american garbage , and on the work performed by waste pickers working in the cities of Montevideo, Cordoba and Asuncion. 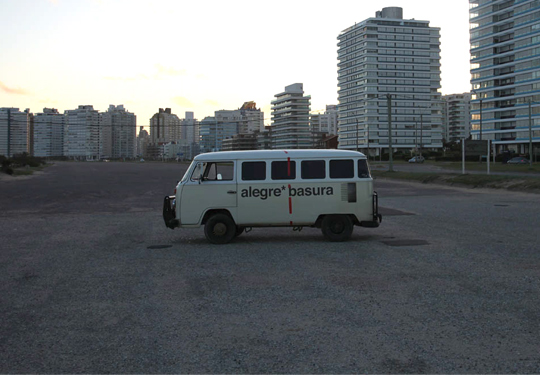 1) The decline of rail infrastructures in South America.

2) There are not borders for trash garbage. 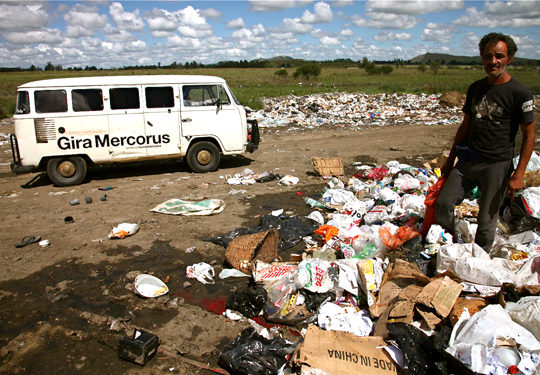 Montevideo: you can collaborate with your local classifier.
1-11 de marzo de 2009

The project took place at the “malecón” (sea sidewalk). Our work focused on highlighting its abandoned situation trough a creative intervention. A giant wave build up with plastic bottles was installed over the “malecón” . The final result also was used as a “venue” for a recreational festival with music, clip showing and more.

During the MercoRus tour, the convoy stopped in Córdoba where we meet some urban weavers and worked with them in a collective urban installation.
This project related the traditional basketwork with palm leafs from Cordoba mountain range together with the plastic PET that picks up the cirujas (informal waste collectors).

The objective of this project was to highlight the ecological, social and urban importance of the work that the informal trashpickers do. They are the ones showing the different elements that define the cycle of garbage in Mexico City. Our aim was to make visible the contrast between the carts that scavengers and street traders used for their daily work with the widespread use of private transport, which becomes the epitome of pollution air in the city.