BASURAMA (Rubén Lorenzo Montero and Mónica Gutiérrez Herrero)
Text written for the book DHAKA TOTEM  promoted by the Spanish Embassy in Bangladesh with  the support of AECID Spanish Cooperation. 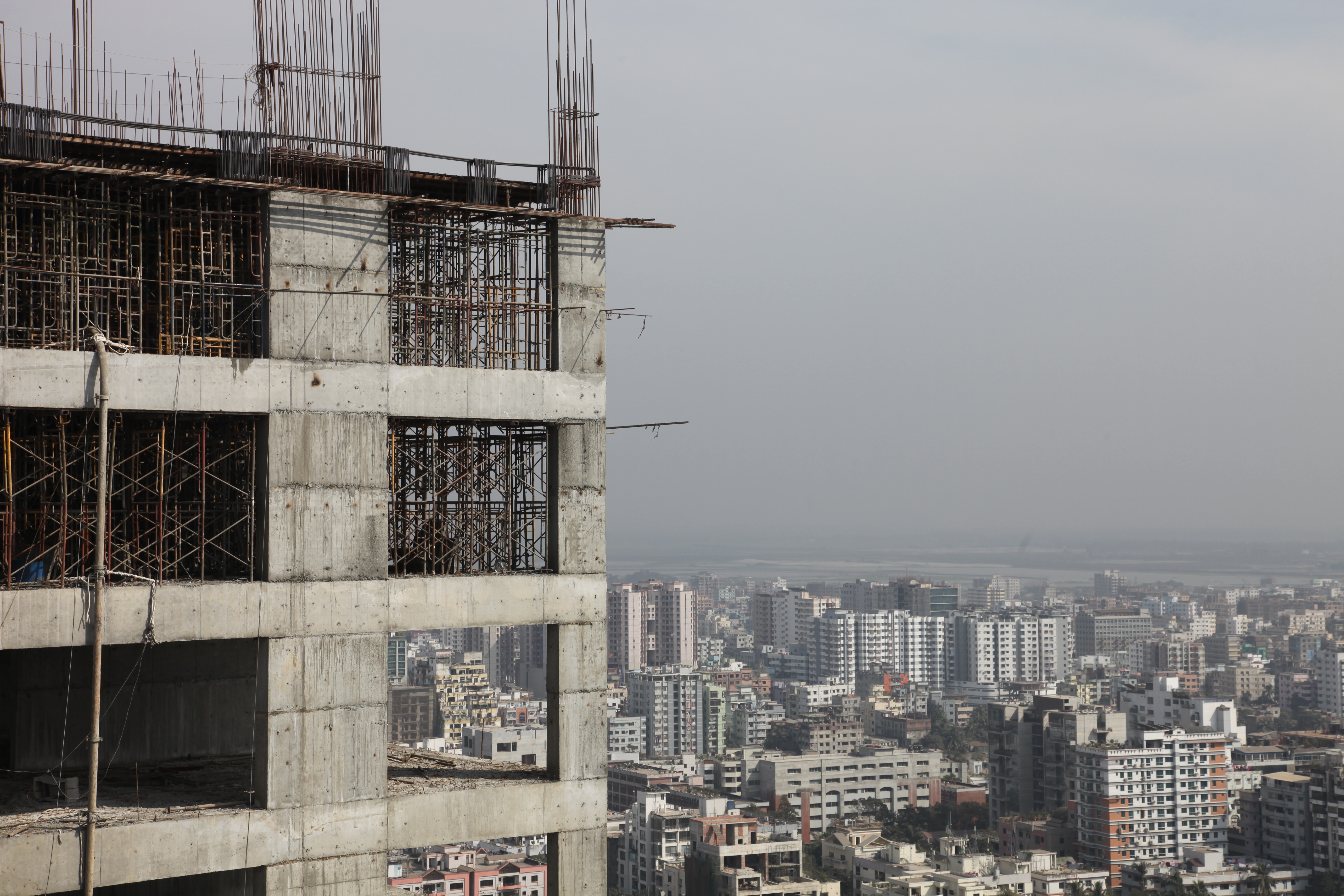 The sunset is the other shore. Have a tea in the small informal stalls dotted along the river. Find a horizon, a point that goes beyond the immediate. Sit down. Stop. Take a walk.

The public space is fluid. Under construction.

In Dhaka everything is transported. Life is transported, there is exchange, there is flow,¿ liquid modernity? People are transported from one place to another continuously (by land, by sea, with motor, with human traction  …). Goods are transported, food is transported, construction materials, liquids, domestic purchases are transported. In the global times of invisible transactions (Amazon, AliExpress …), in Dhaka the exchange is visible and audible, it is present in the city, and the streets are open veins. The exchange beats, it is the life, it is the public space. A fluid public space, not static. Such is the dynamism that Dhaka never deploys as a finished and designed city. Dhaka is in process, in continuous construction. And do not hide it. The waiting irons of the buildings pointing  the sky.

Do people walk in Dhaka? Or they simply go from one place to another? The first days in Dhaka, we saw the city through the car window, with hours and appointments, in a hurry. Undoubtedly, the rhythm is continuous, a permanent flow from sunrise to far beyond sunset. And in spite of all this continuous flow, one thing seems clear (and at the same time strange) if you pay attention: the sensation is not of haste, nor of stress, but of life, of activity, of movement. Why? There is no response at first sight from our European gaze. 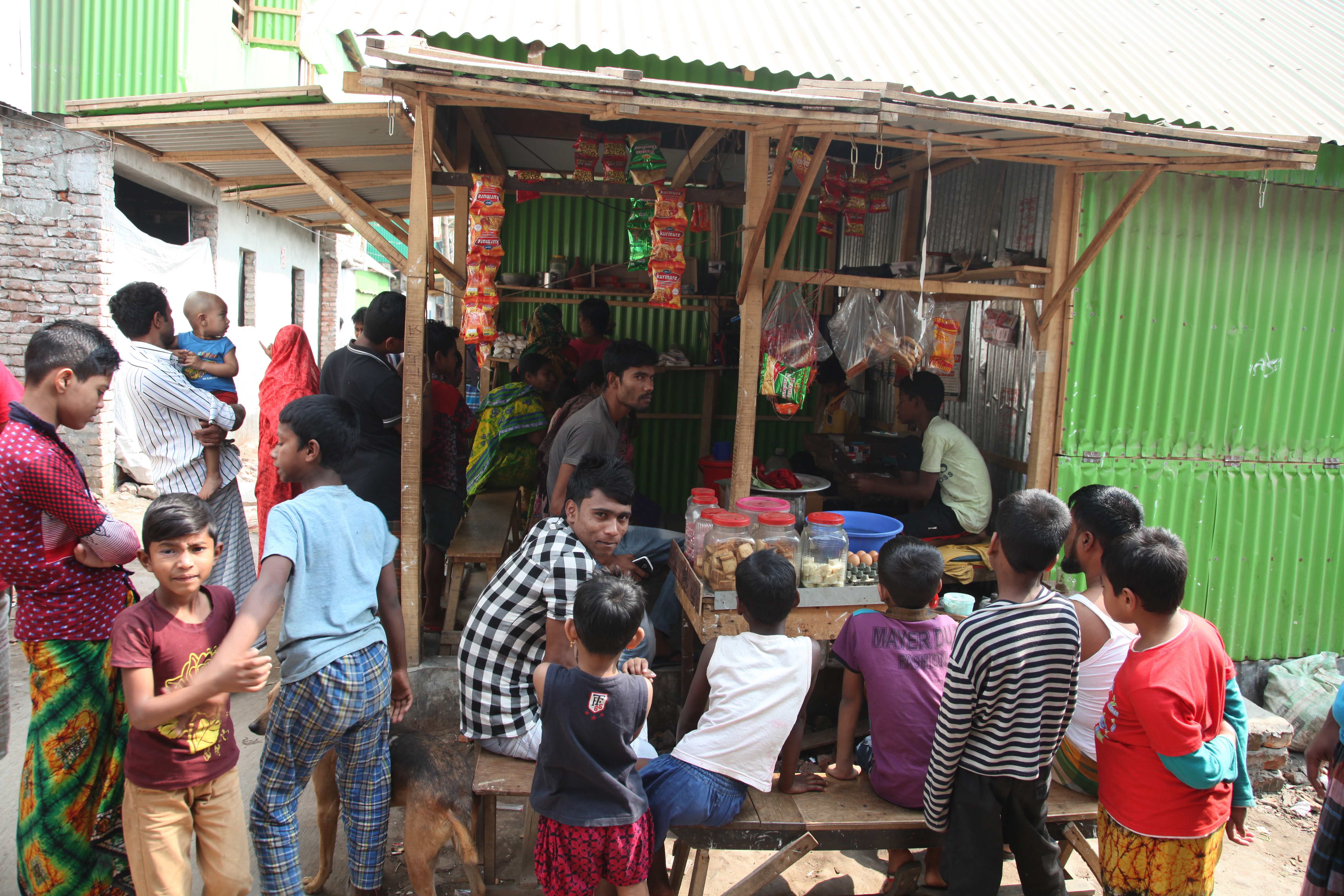 Walking is not going from one place to another.

Why are there no public benches to sit down? When you least expect it, in the heart of the city suddenly the movement stops. Encounter with others in the kiosks, formal or informal, to have a tea and some cookies or a banana. To smoke a cigarette, to look at the river or to watch TV, to comment on weather or to rest for a while. In Dhaka there are places of encounter and community. Hybrid spaces between a cafeteria, a store, a social center, a single-seat bench. Places to be in, not the ones to spend. Paths to walk trough no matter about distances.

Spaces in which we met sailors who had visited the shipyards of Bilbao and the port of Cádiz and exchanged smiles and words recovered from their memory. Because Dhaka is living memory, life is visible, trades … everything that in contemporary cities is hidden, in Dhaka it happens in the streets, in the markets, on the banks of the river. Take care, recover, and repair. Exchange.

There are hangars where onions are peeled until they are beautiful, layers and layers of skin on the ground, weeping eyes, dunes of orange and reddish skins. Hours and hours of work visible by the accumulated remains and by the braided bunches of the onions ready to be sold in the market. The production process at street level. The daily invisibilities are evident in Bangladesh, where the processes of transformation, preparation and sale are not industrialized but are still carried out based on a work force, often exploited and on demand.

The banks of the river, where life is going to stop.

Laundries, sawmills, food markets, ship factories, recycling systems … all industries are deployed on the shore. Today, on the banks of the Buriganga, on the other side of the world, they bat plastic, they wash it just as the gold was washed. As in those images of the western films, in which gold was sought in the rivers, washing the earth until finding the mineral. Is plastic a new gold rush? Is garbage the new mining? But mining works in an inverse manner, attracting people to urban areas (instead of rural areas), which is where garbage is produced. The plastic crushed and classified in colors is put to dry on the shore. From there it will travel to China again.

Transportation is once again being established as one of the main sources of business. And garbage is not excluded from this equation.

In Madrid 4,500 tons of garbage are produced per day, a city with a population of 4 million people; in Dhaka with 2005 data, when an estimated 9 million inhabitants, 4,634 tons were produced. How can it be? How can Dhaka produce the same garbage as Madrid with twice as many inhabitants? The consumption model is the most obvious response, but it also influences that in Dhaka there is still an informal system of recovery and collection, extremely efficient, carried out by the Tokais (garbage recyclers … mainly inhabitants of slums and informal settlements of the city center). What is not counted in the statistics are the millions of tons that arrive from other countries to be recovered, reused and recycled. Shipments of plastic, asbestos, defective steel, used oils, lead waste and batteries; besides having in the Port of Chittagong the second largest cemetery of boats in the world waiting for scrapping. The boats are garbage too visible, cannot be hidden. We always say that society tends to hide garbage, to distance ourselves from it, even we place it in treatment plants that by legislation have to be at a minimum distance of 20km from the urban center.

But in Dhaka the garbage is visible and it is not hidden, it is present, it has value and certain routes, it is a resource of life. It is transformed and put back on the market, in the streets, in the flow and exchange. If the garbage is hidden as in the overdeveloped countries, it is that something is hidden (there is mafia and economic interests behind it). Out of sight, out of mind. On the other hand, if garbage is visible, both in its accumulation and in its transformation, it means that there is nothing to hide, that it is part of life, of the ecology of the city. Of your heartbeats.

In Love We Trash in the World Design Capital 2014 Cape Town.

Batumi and an open air Cinema in the Summer nights